Jason Miyamoto (is completely devoted to him)

Jason: We're not even dat-

Naomi: *forcefully covers Jason's mouth* Did you say something? :)

Naomi is usually very trustworthy. She doesn't get angry easily, but when she does, she simply hides it by smiling. She often resorts to violence. If you have a crush on her lover, she will become brutal and attempt to slaughter you. Excluding that...She is often cheerful and she loves to defend her friends. 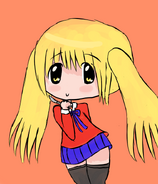 Another drawing of Naomi from mid 2016. 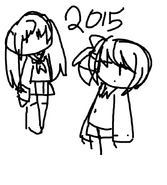 A rough sketch of Naomi and Akira Akiyama.
Add a photo to this gallery
Retrieved from "https://me-myself-and-my-creations.fandom.com/wiki/Naomi_Hoshino?oldid=941"
Community content is available under CC-BY-SA unless otherwise noted.